A skirmish between Belgian Guides and German Leibgrenadiere
on the 17th of August 1914,
nearby the village of Zepperen, Sint-Truiden (Belgium)

Tension got high, those first days after the German ultimatum. Even in the village of Zepperen on the northeastern border of the town of Sint-Truiden in the Flemish part of Belgium. People were outraged by the German threat to invade Belgium, thus violating the neutrality of this little country guaranteed by the great European nations. On August 1th, the young conscripts in Zepperen were mobilised and traveled by train towards their garrisons. Some of them saw it as an exciting adventure. All of them forgot the little quarrels and everyone was in a very patriotic mood. Don’t forget that Belgium had not known any hostilities for as many as eighty years. Being in war was an unusual feeling. But when the fresh soldiers saw the railway-bridges and some houses blown up by the Belgian Army as a precaution measure to obstruct the German troop movements, their excitement changed into concern and fear. When these reservists were ordered to sharpen their bayonets, they realised that things got very serious indeed ! 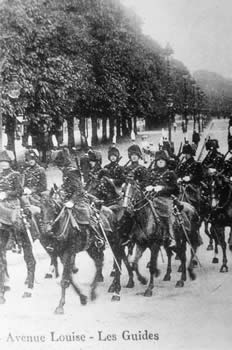 The Guides on parade in the streets of Brussels

On the 6th of August, the village councilors and administrators had to gather a lot of cattle near the railway-station of Ordingen. From Zepperen-Ordingen this livestock had to be brought by train to the station of Bressoux near Liège. It was intended for the fortress of Loncin, one of twelve major strongpoints around Liège. Loncin was the bolt on the railway and the main road from Liège to the capital Brussels. Since the traffic by train was impossible – the Germans had already crossed the Belgian border – the herd of cattle was taken by foot via the main road Brussels-Liège. In the meanwhile, the German artillery bounced on the fortresses of Liège, and all traffic on the roads that led to Liège was haltered. So the cattle of Zepperen never reached the defenders of Loncin…
Elderly people still recall encounters with parties of German Ulans – mounted scouts with long speares- during the first days of war. These horsemen committed sabotage on railwayroads and were the eyes of the German army, before the planes got into action. But in this region of wet Haspengouw, with a lot of hedges, meadows and trees, reconaissance was a very difficult task. The 9th of August, a hot Sunday, the first horsemen of the 2nd Cavalry Division, led by general von Garnier and part of the German 1st Army, reached Zepperen and Sint-Truiden. They had crossed the river Meuse on a pontoon-bridge by Lixhe and came from the eastern direction Tongeren-Borgloon. They now met with the first resistance from the Belgian mounted Lancers and “Black Devils” on bicycle. These were helped by members of the citywatch of Sint-Truiden. The Germans took a few casualties and were furious : they saw everywhere ambushes by so called “Freischutze” or civilians who fired on them. They reacted unnecessarily harshly and cruelly towards the civilian population. Summary executions and even atrocities were reported.
In Zepperen, a horseman of the Leibhussards, called Otto Seeger, was shot down from his horse and then killed by Belgian Lancers, reputedly as he refused to surrender. Otto was born in Klosterfelde near Berlin and died as the first one of 54 young men of this German village in World War I.

The Belgian Lancers were part of the only existing Belgian Cavalry Division. The division was to protect the rest of the Belgian fieldarmy posted behind the little river Gete, the first natural obstacle for the Germans on their way to Brussels and Antwerp. At first they moved from Waremme to Sint-Truiden. When reports by plain civil phone came in that hundreds of thousands of Germans marched onto this obstacle, the Cavalry Division moved northward and posted itself also behind the Gete nearby Halen. After a succesfull but exhausting cavalry skirmish with Belgian Lancers in Neerlinter near the crossing of the main road Liège-Brussels with the river Gete, the German cavalry also decided to move northwards. They tried to cross the Gete near Halen, but never managed to force a breakthrough. The Belgian Cavalry, assisted by hastily ordered in reinforcements of infantry, fought on foot in a defensive position. Successive waves of German attacks by Uhlans, Dragoons, Hussards en Cuirassiers where decimated by intense Belgian rifle fire and shrapnell from a few canons on a hilltop. This battle, the last cavalryclash on divisional level in Western Europe, afterwards was called “The battle of the silver helmets”, because so many German cavalrymen with their shining helmets under the khaki cover were killed that 12th of August.

The small Belgian army was in a winning mood ! Although this victory meant little on a larger scale : hundred of thousands of German infantrymen were marching against the Gete-line of defense. On the 17th of August, a squadron of Belgian Guides, the elite scouts of the Belgian Cavalry, was sent out to spy on the German march through via Borgloon-Sint-Truiden. They took pigeons with them to stay in contact with their headquarters behind the Gete. Unlike the Germans in khaki, these troopers were still dressed in their colourful 19th century style uniforms : dark green with purplish red trousers and black busbies. When the party took a break near a popular tavern at the Bernissem-woods, they believed themselves to be sufficiently hidden by the trees. So no watches were posted. The captain, according to him, halted to write his report. Two of the troopers asked for apples in a nearby farm. On of them was lighthearted and enjoyed war. The other seemed sorrowful as if he suspected his dead that afternoon. The farmer afterwards identified these men among the killed Guides.
In the meanwhile, the German main force on foot invaded the town of Sint-Truiden and the surrounding villages. Any resistance was neutralised by the German Cavelry and ‘Jägers’ a week before on the 10th of August. A battalion of Leibgrenadiere searched for lodging in the boys school, held by the Assumptionists fathers, only a mile away from the resting Belgian Guides. The soldiers were very tired after the long marches in the hot August sun. They got ready to wash up and spent the night in the school. Suddenly, around two o’clock in the afternoon, an elderly German sentry on watch spotted the Belgians and ran quickly to alarm his officers. At first the commanding officers refused to believe him, but when they saw the unmounted horses and the Belgian cavalrymen playing cards, drinking and resting, the officers quickly set up a surprise attack. It was their baptism of fire. Most of them were nervous, but young German platoon leader Friedrich von Guretzky-Cornitz was anxious to finally engage the enemy in battle. A few weeks afterwards this 22 years old lieutenant and nephew of the German infantry general Hans von Guretzky-Cornitz was killed in action against the British Expeditionary Force near Mons. He got his Iron Cross.

The Belgians close to the inn had no chance of getting away. Ten of them were shot dead or perished in the building that was set in flames by the Germans. Even the old innkeeper Alfons Lassaut was killed, one says by bayonet thrusts. The following day, after a second fight with German infantry near Nieuwerkerken, Captain baron de Wykerslooth de Rooyestein, the leading officer of the Belgian squadron managed to cross the Gete on foot. Only 22 men and four horses of his original 120 horsemen escaped. His lieutenant, Adelin de Menten de Horne, was knocked off his feet by the fleeing horses in Bernissem-woods, got uncounscious and was taken prisoner, together with the chief sergeant. The fleeing Belgian Guides were pursued by other German infantery and as far as Melveren, in the north of Sint-Truiden, one of them was shot dead. Tragically, one of the fleeing troopers, Jules Vantilt was shot down from his horse and killed only miles from his homestead. Jules was the son of the burgomaster and sexton of Wijer, a village to the north of Zepperen. This brigadier tried to hide between the potatoeleaves, but was then thrusted in his throat. Only days later his father found someone brave enough to help search the battlefield and to pick up his sons corpse. The body, already decomposing in the hot summer sun, was then quickly buried in the churchyard of Wijer.

The next day, the Assumptionists fathers buried the fallen Guides and the dead horses on the spot. Some faces were mutilated by hungry pigs that ran free. Dead bodies were even ransacked by some unscrupulous local civilians. The following February the corpses were decently buried in an honoured place in the churchyard by the Saint-Genevievechurch in the village center of Zepperen. In the midst of German occupation, this ceremony allowed people to express their patriotic feelings and a large crowd attended the funeral. The memorial print says a poem : Eight young and brave soldiers died far away from their loved ones and got a place in the finest, holy soil of Zepperen. In 1924, ten years after the event, the bodies were transferred to the collective Belgian warcemetery in Velpen near Halen.

The burial of the fallen Guides in February 1915 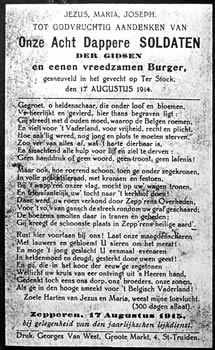 Hector Lambrechts, father of Charles, who fell as a Guide in Zepperen, wrote a book on the causes and lessons of a World War, around Easter 1915, after “a horrible fall and a sinister winter”. He published the book in Utrecht and Berlin and dedicate it to his deceased son.

Jan Pelgrims (°Ramsel 1891), a farmers son, now orderly, whas captured with his lieutenant de Menten. He worked as a prisoner of war on a German farm for four years. Afterwards he kept silent about his wartime events, but he visited Halen and its war cemetery as often as he could. 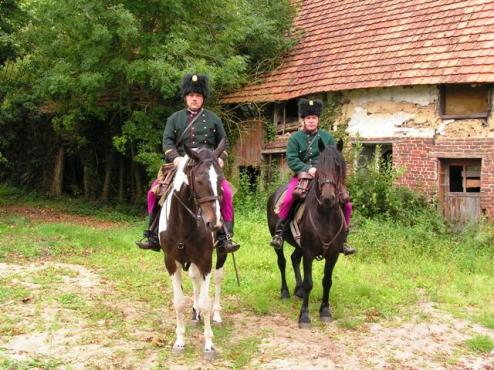 See also: eyewhitness accounts from :
1. The Belgian commander of the 3th Eskadron (in French)
2. The German Leibgrenadiers (in German)
3. The Assumptionists fathers (in French)