The liberation of Zepperen by a U.S. reconnaissance patrol, September 1944,
and the 25th Field Artillery Battalion in billet, December 1944

After the landing in Normandy, 6th of June 1944, the Allied forces started the liberation of Belgium in September as quickly as possible in order to use the very important seaport of Antwerp. On September 4, 1944, the 113 “Red Horse” Cavalry Group Mechanized, which was bivouacked south of Tournai, received the mission of reconnoiter agressiveley east and northeast in the zone of action of the XIX “Tomahawk” Corps, 1th American Army. Strong opposition was to be by-passed. The German situation was to be determined and the condition of roads and bridges was to be reported. The 113th and the 125th Cavalry Reconnaissance Squadrons were reinforced. No support could be expected from the main combat elements of the corps, for it was temporarily immobilized because of a gasoline shortage. On September 7, the 113th on the right fought its way to Saint-Trond, where strong resistance was encountered at Staaien as they were ambushed. In the meanwhile the 125th, reinforced by Troop C of the 113th advanced to the vicinity of Hasselt, which was captured before dark. By this time the 2d Armored Division “Hell on Wheels” had refueled and its reconaissance element, the 82nd Armored Reconnaissance Battalion, had overtaken the 113th. The A-Company received a very warm welcome by the people of Hasselt but suffered casualties by German fire on the road to Kortessem. By midafternoon September 8 it had been determined that all bridges over the Albert Canal and the Meuse river had been destroyed by the Germans.

A vehical, typical for the U.S.A. Army, was the M8 Ford “Greyhound” light armoured car, on six wheels.
It had a 37 mm.-gun and a Browning .50-gun on the open turret.
Edouard Bonneux, son of the town secretary, managed to take a snap shot of one of those M8-cars
in the street leading from the town center to the railway-station of Ordingen on Friday the 8th.
It probably was one of the reconnaissance vehicals returning from the front line and regrouping

Captain William M. Floyd, headquarters Battery commander en communications officer wrote :
We were in Zepperen. The townspeople were glad to see us as the Germans had only recently been driven out. We drew our ammunition and made any last minute changes before entering combat. The day we left, two Belgian boys approached me and asked if they could go with us and help fight the Germans. One, Theo, had been in the underground and the Germans had burned his house before they left. The other, Bill, lived near our Zepperin headquarters and just wanted to go along. We outfitted them with uniforms and even got fake dog tags so that if they were captured they would be prisoners of war and not spies. In 1969 Helen and I and one son, Brian, went back to Zepperen. I couldn’t remember where Bill lived but I had a picture of Bill, Theo, and I taken after the war. I went into a tavern and showed the picture and everyone in the place went out in front to point out Bill’s house which was close to the tavern. We saw Bill and his wife and two children. His wife served us some pie and coffee.
We finally went to war. Our first action was in the Hurtgen Forest. It had been a bloody battle for two or three weeks but when we arrived it was nearly over.

1st Lieutenant Antony Shookus, forward observer of C-battery, also wrote down some memories :
On December 7th, we travelled tot Leige (Liège), Tongres and Zepperen, Belgium. Here the men were billeted in a schoolhouse which the town turned over to us. The soldiers were welcomed very gladly by the civilians, they couldn’t seem to do enough for us. Here the officers roomed with private families. The people took very good care of us, we were the first American troops to come to this town. At night we could hear and see the German buzz bombs as they flew overhead, headed for England, Antwerp, Brussels and Saint-Trond. Some landed nearby and made a very loud noise. We could see the bombs in the daytime, our planes would not even try to chase them, they were too fast for them. These boms were bad on the nerves of the men, the windows in the schoolroom would tremble as the boms passed overhead.
An advance party, consisting of the Battery Commander and Reconnaissance O.-parties left Zepperen on the 21ste of December. We passed thru Maastricht, Holland, and Imendorf, Germany. Here the party came into the front lines being held by the 102nd Infantry Division. Some plans went wrong that day and later we returned to Zepperen. We were glad to get back. We had seen conditions under which the men lived at the front and decided that we had enough. It was a releaved feeling that we all had after our return.
The next day the same parties moved out again. Lieutenant Buehler was left in charge of the battery in the absence of the battery commander. This time we went to Aachen, Brand, Stolberg and Mausbach, Germany. We came to Mausbach late in the afternoon and camped there that night. The next morning we traveled to Grosshau, Germany, where we selected our first gun positions. At the position were 6 knocked out American tanks. This position was at the very edge of the Hurtgen forest. There had been terrific battles all around the position and dead American and German soldiers were all around the area. There were two graves in our position, kind of a gostly place to put in your guns. Later in the day the battalion left Zepperen and came into position late in the afternoon. The guns were placed in position that night and the men dug in for the night. Some enemy shell came in during the night. We all slept with our helmets on during the night. It was our first night in combat and all were rather jittery. All the bravery had seemed to leave ones system so quickly.
So, alerted for commitment in the XIX Corps sector, the battalion moved through the grim remains of Aachen and had its first baptism of fire when the battalion column was strafed in Stolberg. The battalion occupied its first combat positions in the Hurtgen Forest. 1st Lieutenant John M. C. Neilson wrote in 1984 from Fort Davis, Texas, to Henry Selis, Madeleine and their beautiful Nady, and to Mother Martens, Emma and family about his feelings when leaving Zepperen : It was 40 years ago, a few days before Christmas, that we left the warmth of Zepperen tot go into combat in the Hurtgen forest in Germany. The guns of the 25th Field Artillery fired their first rounds that Christmas Eve, but our hearts were on Dekkenstraat. 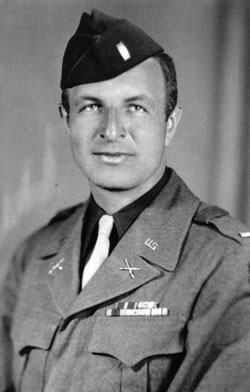 While the guns of the 25th Field Artillery Battalion assisted in driving the Germans east of the Roer, the 3225th Quartermaster Service Company arrived in Zepperen. But that is a other story !